The Phuket nightlife scene has a reputation for fun and friendly bars and hedonistic pleasures. But did you know that Phuket has some of the best nightlife hotspots in Thailand? The nightlife scene in Phuket is right up there just behind Bangkok and Pattaya. When you want to experience a Phuket nightclub venue, you need to visit the colossal Illuzion Phuket disco.

Illuzion Phuket is located in a prime spot in the heart of the world-famous Bangla Road. This hustling and bustling street is one of the most exciting Phuket nightlife areas. With so many bars, restaurants and nightclubs, you simply cannot afford to miss this area when on holiday.

In a street full of scintillating nightlife entertainment venues, Illuzion Phuket still stands out from the crowd. This massive venue can host up to 5,000 people and also has more than 300 VIP tables alone. The venue has three main rooms/areas that regularly hosts a myriad of top-flight DJs, both domestic and international.

As EDM becomes bigger and bigger by the year, clubs such as Illuzion Phuket is taking dance music to another level in Thailand. From the ultra-modern interior design to the immense sound and visual technological systems, Illuzion Phuket is the premier Phuket nightclub on Bangla Road. 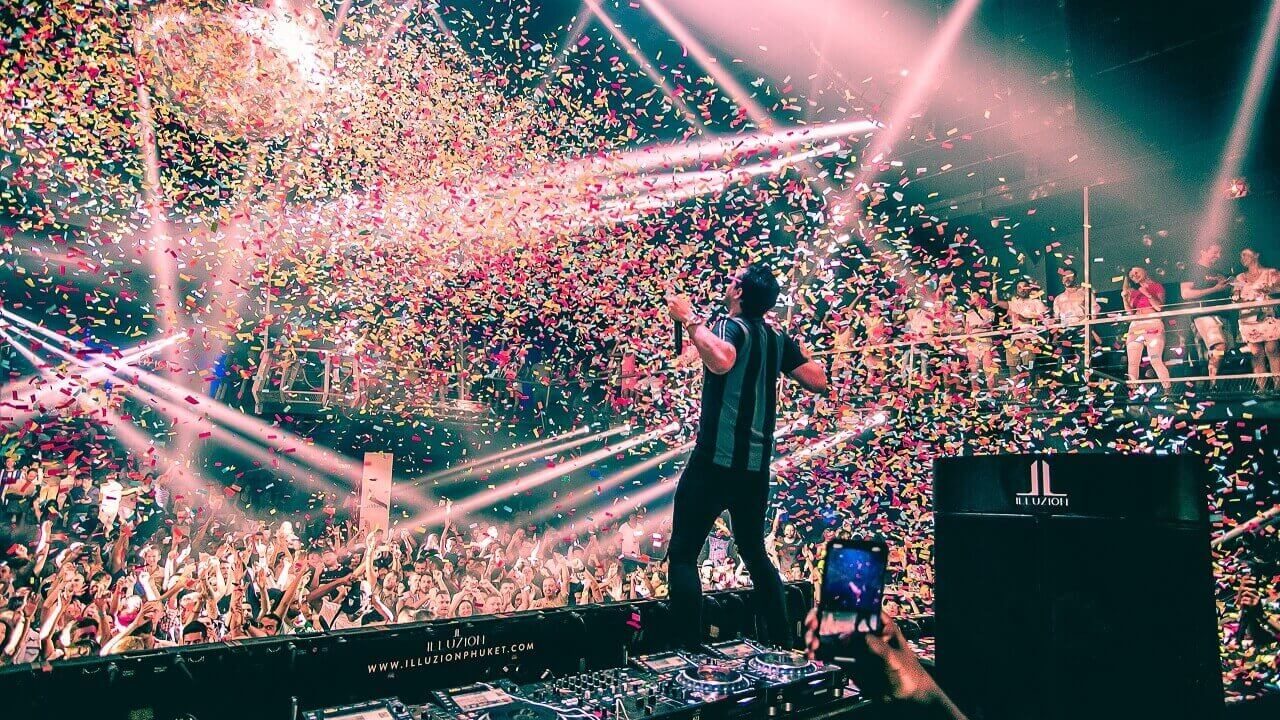 Illuzion Phuket is one of the best Phuket nightlife options, located on Bangla Road

Illuzion Phuket first opened its doors back in 2014. Since then it has grown to become the premier Phuket nightlife venue for top DJs and performers.

Over the course of the past several years, some of the largest EDM names have performed at the club. EDM heavyweights such as Marshmello, Martin Garrix, Tiesto, Afrojack, Steve Aoki, and Sven Vath have all played live sets at Illuzion. A litany of famous singers and hip-hop emcees have also played at the club. Ja Rule, Wiz Khalifa, Soulja Boy, Tyga, and Kid Ink, just to name a few.

Illuzion Phuket continues to attract top names from the music world to perform in Phuket. Not many clubs on the island have that same reputation for attracting stars. When you are on holiday in Phuket and want to catch the best live DJs and performers, make sure you get over to Illuzion.

Reaching the Pinnacle of the Phuket Nightlife Scene

Illuzion Phuket has a reputation for reaching the pinnacle of the Phuket nightlife scene within two years of opening its doors. The reputation of the club surpasses its location in Phuket. The club is known across the EDM scene in Asia and beyond.

The venue is also the ideal place to book for a party or a function. You can even hire the club for product or brand launches. This is also a great place to hold a corporate event. Even if you are just visiting the club with your friends, but want a bit of space, you can rent a private VIP room. The areas can be partitioned to suit your needs and specifications.

The club is set over 5,000sqm and comes equipped with a massive 100sqm HD LED wall. Illuzion is also home to state-of-the-art sound and lighting systems, DJs booths, dancing stages, and everything else you need for a great night out partying. Bangla Road is a great party street, but Illuzion takes it to the next level.

Are you currently in Phuket and are looking for an epic night out to the accompaniment of live DJs? Are you looking for the ideal venue for a private party or function? If so, the premier Phuket nightlife venue is Illuzion Phuket. Just make sure you have enough energy to dance the night away at this exciting establishment.